Classic Climbing in the Tetons: CMC Route on Mount Moran 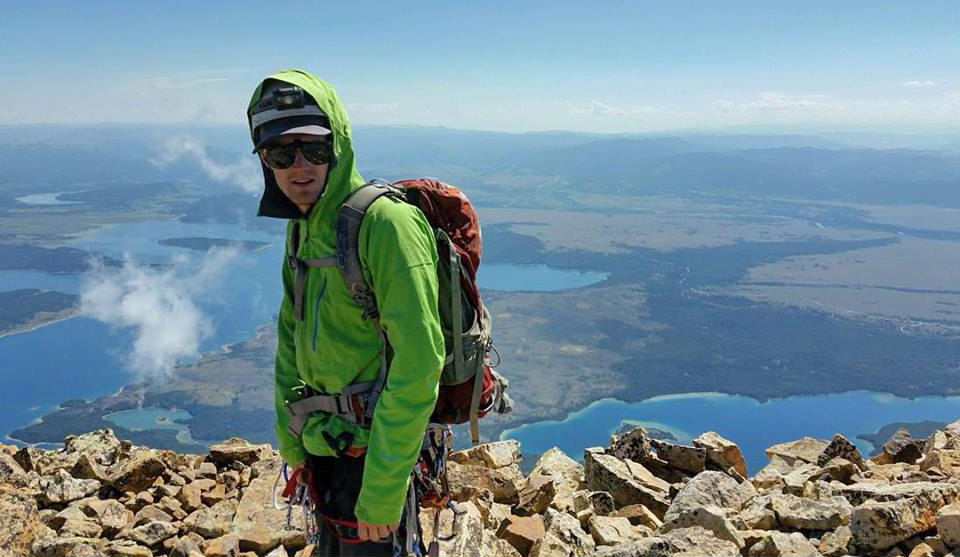 I find it interesting how intense the alpine world is. I have spent the last few years gradually climbing harder and harder mountains. It never ceases to amaze me how insignificant I feel when I commit to a big climb.

The CMC Route on Mount Moran is an Alpine grade II and the face is 1000 feet of 5.5 climbing. My friend Kirk and I got our permits at the rangers station a few hours earlier, but we were still in the car waiting. Rain continued to fall hard on the windshield and we sat wondering if we were going to have to canoe String and Leigh Lakes in the rain, the dark or both.

Finally, blue skies became visible and we unloaded the canoe and our packs and carried them to the banks of String Lake. Our packs were heavy because they contained our food and sleeping arrangements for the next two days, as well as the climbing gear we needed to get to the top of Moran. This included two 60 meter ropes, two trad racks, harnesses, helmets, tent, sleeping bags and pads and layers to stay warm while climbing.

String Lake is more of a stagnant river and is only about 6 inches deep in places. This made navigating a bit difficult, and found ourselves bottomed out a few times. The views of Moran were awesome as we reached the portage and carried our canoe 100 yards to the banks of Leigh Lake.

We shoved off and began our hour long paddle across Leigh Lake and to the base of Mount Moran and the approach to our campground, and eventually, the CMC Route. We hit the shore after a peaceful ride and gathered our belonging to begin the slog to the campground.

Boulder hopping and muddy trails brought us closer to the Falling Ice Glacier until we turned left and up onto the ridge taking numerous switchbacks that led to the lower campground. Two and a half hours after leaving the canoe, we wound our way through a few tents to the upper campground.

We set up camp and made food, filling our water bottles as well. Before the sun set, we hiked a ways up the 4th class section to scout out the route we would soon be taking in the dark of the following morning. Just before nightfall, dark clouds rolled in and intense thunder, lightning and hail soothed us to sleep.

Luckily, at 4:15am we woke to stars. We prepped and headed up the route we had scouted the evening before. After the 4th class sections just above camp, it opened up to a steep slope of loose scree and mud. An hour and a half brought us to the top of Drizzlepuss and the sky was brightening from the sun preparing to rise.

The first move over the top of Drizzlepuss and down about 10 feet to the ledge is definitely exposed and scary. We navigated past it and down some 4th class ledges to a ramp where I was sure people rappelled. We slung a rock and backed it up with cams to make the rappel. Another party that was roped and down-climbing found a bolted anchor. Too late, we were already rapping.

We reached the notch and I geared up for lead. The first section of climbing is a 40 foot 5.4, exposed face. I climbed up to a sling, clipped it and climbed past into a traverse climbers right to a right facing dihedral. The gear was sparse but the 5th class climbing was fairly easy. The wet portions made things a bit interesting though.

I continued upwards as we simul-climbed through up about 350 feet and right about 200 feet. I was about out of gear, so I made an anchor at a fixed pin and belayed Kirk up to me.

He took the lead up a steep, insecure crack that turned to 4th class blocks for a while before he traversed right across an exposed slab to a gully and the base of a steep bulging feature in the rock. Here we had probably ticked off another 200 feet up and 150 feet right.

I took the lead up the steep bulge over some 5.6 terrain to a large ledge and onto another face that leveled into a slab before becoming 4th class again. I climbed a little further and belayed Kirk up to me. We were close to the top now and had probably climbed another 300 feet up.

Kirk took the lead for the last 250 feet of blocky 5th class climbing until we reached the football field of sandstone blocks at the top.

We were both surprised that it took us about 4 hours of climbing to get to the summit from the notch. The reason for this is because even though the route says 1000 ft and 5 pitches, it is much more climbing because of the traversing required. The route ended up being about 1500 feet of climbing. We did it in 4 medium length simul-pitches and probably could have made it in three if we pushed it and spaced the gear better. Another party that climbed that day did each pitch individually and it took them 8 full rope-length pitches to the top.

Because of this, I feel like Mountain Project was a bit off on the length of the climb. Granted, we ended up climbing about 50 feet left of the black dike as we got close to the summit which is supposed to be more difficult climbing. It also requires more traversing to get to this section of the wall than is probably necessary. All in all, I am a solid 5.8 trad leader and I felt like I underestimated the difficulty and full-on nature of this route. It requires a long summit day and is very committing. If the weather turns south, you’ve got to climb to get off this mountain. The weight of this and the descent hit me when we were on the summit.

Normally I feel a sense of relief when I have hit the halfway point and stand on the summit of a mountain, but the intense nature of the descent off this route fully sank in as we hydrated and ate some snacks. It was 11:30am and the sky was clear as we rapped of the summit to the top of a chimney and traversed skiers right to a large cairn stack that marked the next rappel. Another double rope rappel got us to some blocky, exposed 3rd class downclimbing. We moved downward for a few hundred feet until we hit some newer looking pins with some slings.

Another full-length double rope rappel put us on the pin that I belayed off of at the top of my first simul-pitch. I got back on lead and down led about 100 feet to another rap anchor and belayed kirk across to me. We rapped another full, double rope where I built gear belay and Kirk came down to me.

I down-led again protecting Kirk to follow and climbed down about 70 feet and traversed right another 80 feet to the pin above the notch. We had to simul-down-climb for about 15 feet to get to the pin. We then rapped the 40 feet to the notch.

Kirk geared up to lead the 200 foot 5.6 or 5.7, extremely exposed face of Drizzlepuss. He started up and made his way over the lip at the top. I began climbing as he hip belayed me over the edge. In no time, we were both standing on the top of Drizzlepuss again. 12 hours had passed since we stood there earlier that day.

We hiked back down to the 4th class ledges and made our way back to camp. We cleared up and packed our gear, leaving camp around 7:30pm. The 2 and a half hours up was about 1 hour and 45 mins down, but we still reached the canoe in the dark. We turned off our headlamps and used the light on the horizon to guide us across the lake.

We reached the shore where our car was parked around 11:30pm. We loaded up our gear and started the drive home…