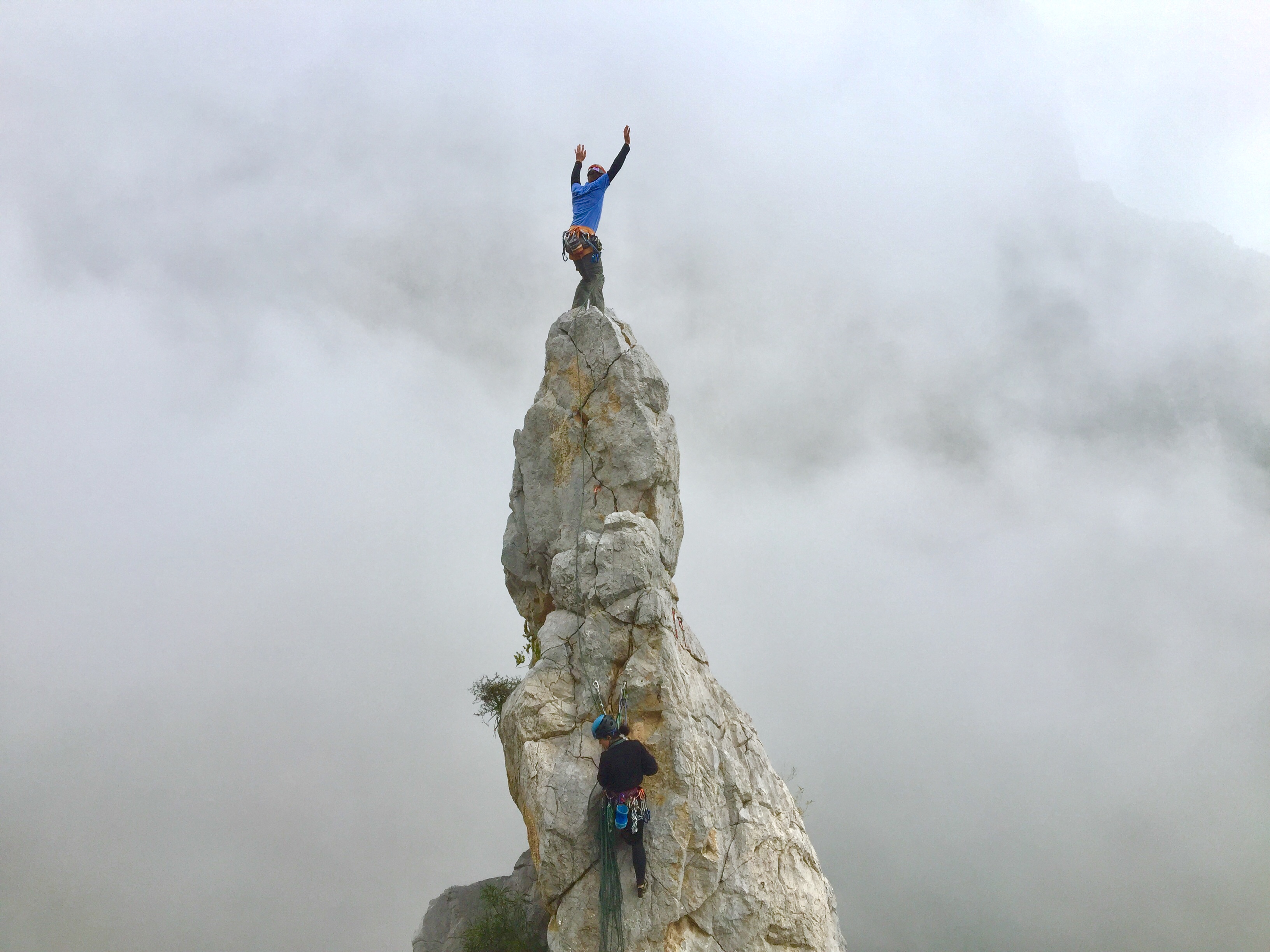 For New Years every year, Kim and I team up with our friend Brent for a trip somewhere “warm” to get away from the bad air and cold temps in SLC. This year, we decided to take a trip down to El Potrero Chico because it provides some awesome limestone multipitch climbing and because that video of Alex Honnold free soloing there is ridiculously awesome.

We had some skymiles, so we booked flights to San Antonio and then caught a bus that night across the border. We slept poorly and were delayed at the border for a few hours, but arrived at Ariel’s Chalet around noon. Kim was too tired, so I partnered up with a random person and climbed a quick 3 pitch, .10b called “Cactus Pile.”

After climbing Kim and I walked down the main road to get some food. Eventually, Brent and Ayaka met up with us and we hung out around a fire and danced. In the process, Kim and I both lost our passports. Long story short, we found them the next day…

The following day, we climb a route called Estrellita. This route is 12 pitches and has an .11a 4th pitch variation. There were a lot of teams on the route so in an attempt to pass some, we linked another route to the top of the 3rd pitch. I was stoked to send the .11a, 4th pitch clean and then we waited in line on a big ledge for about 2 hours. Kim led the next three pitches at 5.6, 5.7, and .10b. It was cool to watch her get up one of the crux pitches on the route that goes at .10b. After 12 hours of waiting behind people we made it to the top and rapped down in the dark.

The next day we wanted to take it a bit easier and so we jumped on a route on the spires called Aguja Celo Rey. It was a polished, runout, and sandbagged first pitch. The second pitch was awesome. Techy, slab climbing up an exposed arete to the top of a tiny spire. The fog and wind blew around us as Kim and topped one tower and Brent and Ayaka topped out on the other. It was a surreal experience.

New Years night was a bit of a party and then it rained New Years Day and was absolutely freezing on January 2nd. Two rest days in a row.

On January 3rd, the weather improved in the afternoon and Kim and I got out on “Black Cat Bone” a 9 pitch .10d. After 6 pitches the sun dropped behind the mountains and it got really cold so we rapped down. The route was sick though. A couple 5.9 pitches, a 5.7 and a .10b pitch brought us up to the .10d crux pitch. A technical, thin slab leads up to good rest before a big roof. I sent the slab section, but the roof was all polished and after I pulled it, I was scared to clip so a grabbed a draw to clip the rope and then freed the rest of the moves. I’m kind of bummed, but stoked that I freed the techy slab which the guidebook considers the crux of the pitch.

The next day, we decided to try some cragging, so we climbed some single pitch routes on the Jungle Wall. Kim led a route called Chiki Baby (5.8) and I linked the first 2 pitches of 3 different routes: Timon y Pumba (.10a), Jungle Mountaineering (.10a), and Jungle Boy (5.9+).

The next day, We tried to do some more cragging, but we were all exhausted. I managed to send a single pitch route called Kelso’s Way. It was a bit tough for .10b, but I think we were just beat. Kim lead the first part that goes to a set of chains rated 5.9. and then Ayaka tried to do the .10b extension but whipped a bunch of times, so I had to lead the route twice.

The following day, Kim and I got on a 6 pitch route called “Dope Ninja.” It was slightly inconsistent climbing up a prominent arete. Kim led the first pitch at 5.7 and I ran up the first part of the next pitch that the book rated 5.9. The climbing did feel 5.9 until a bulge onto a blank slab. I hung out for about 5 minutes trying to find the solution before I had to take. I was pretty bummed. I made it to the next pitch rated .10b, but I was nervous because the previous pitch had shut me down at 5.9. Because of this I botched the crux sequence on this pitch, too. A bit discouraged, Kim and I topped out and rapped down just as it was getting dark. As I ticked the pitch on Mountain Project I noticed that the 5.9 pitch I had messed up was actually rated .10b as well. This made me feel a bit better.

By this point of the trip, the skin on my fingers was basically destroyed. We woke up on our last day and were all feeling wrecked. We decided to go for a route that we had heard a lot of good things about called Treasure of the Sierra Madre. I got on the route before Brent and Ayaka. Luckily there was only one party other on it, and they were already a few pitches up. I linked the first two pitches, both at .10a. Then I linked the next 2 .10c and 5.9. These two pitches were my favorite of the trip. Incredible. I then linked the next two: .10c and 5.9 again. This .10c being the crux. A techy slab to a bulge. The slab was tough but I managed to pulled it off and send the route. I was pretty jazzed because I felt so beat up that morning. Kim took us too the top by leading the final 5.7 pitch! We rapped the route and went back to our room to pack.

We rode into Monterrey with Brent and Ayaka, but we couldn’t find our bus terminal. Eventually, we found a different terminal and had to buy new bus tickets for the following day. Because of this delay, we missed our flight and had to reschedule. Luckily, this didn’t cost us any money.

After nearly 48 hours on the go, we landed back home in SLC and I went immediately to work.