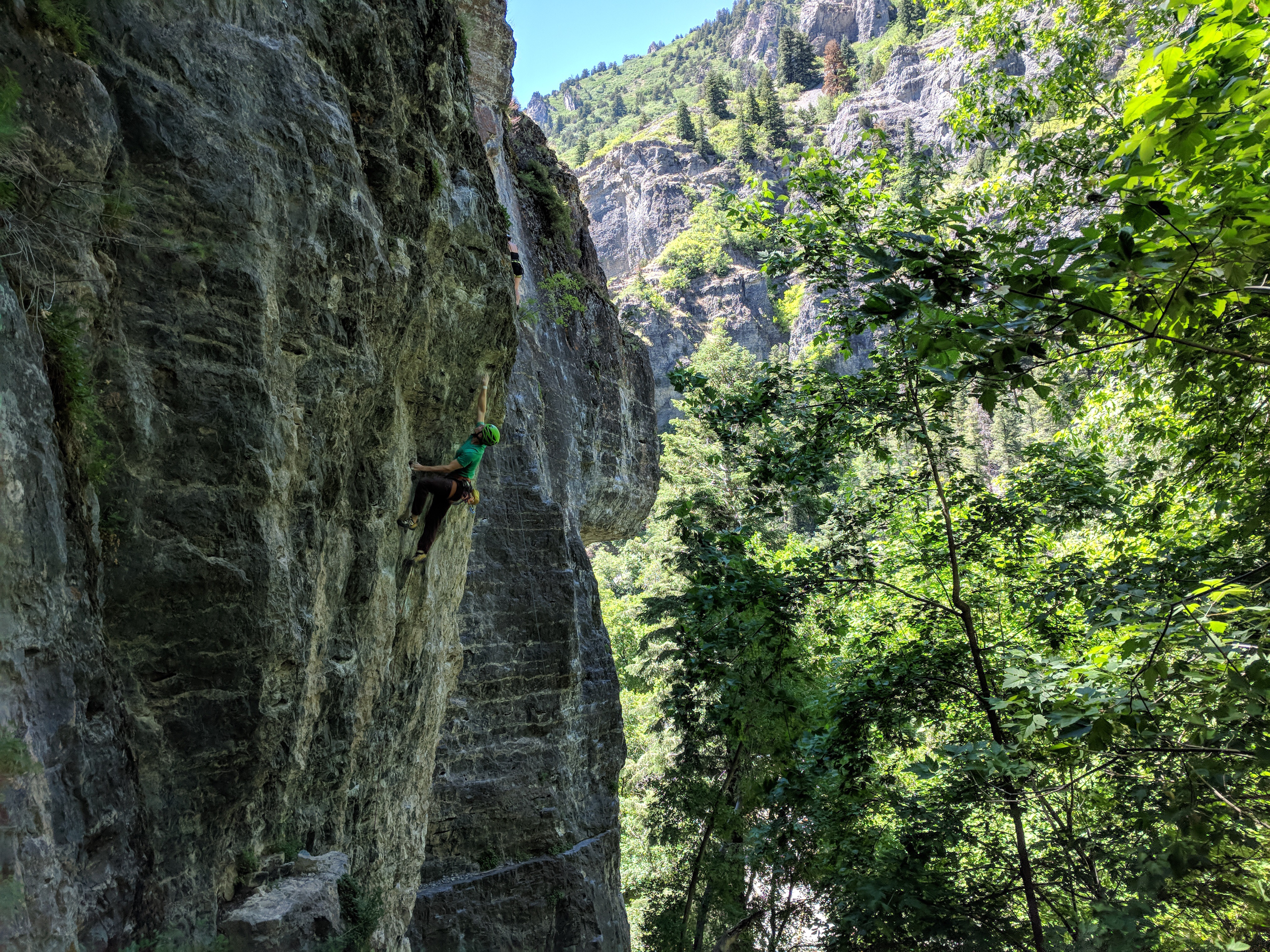 My fingers were bleeding. They popped off the crimp I was pulling on and as they did the knuckles dug across the wall. I dabbed them on my pants and then stuffed them into my chalk bag. The white powder on my knuckles saturated and turned red. Flaps of skin stuck out around the pooling blood and I dabbed them on my pants again. I pulled myself back up the rope and stuck the move that I had just fallen off of. I clipped the next bolt and sat on the rope, feeling the holds and looking at the sequence. I mimed the moves of the next section in the air. This process continued up through the next few bolts until I clipped the chains.

“This feels harder than I thought it would.” I said down to my two friends at the crag as I lowered back to the ground.

“Figuring out the moves always feels harder than the redpoint attempt. I think you’ll be surprised when you get back on it.” My friend Nolan replied, encouragingly.

I sat, rested and belayed while my two friends tried a few routes before jumping on the route again. I had no problem climbing through the sequence where I bloodied my finger, got to a big hold before a dyno, and went for the move…and completely missed the hold. I pulled myself up on the rope and climbed to the top, dialing the beta further. Again, I rested.

I tried the route again and missed the same hold. “Dammit.” I lowered and rested.

My fourth time on the route, I climbed to the big hold before the dyno, shook out, and took a little more time setting my feet up. Bam! I stuck the move and climbed through the last few sequences and clipped the chains. I had sent my second .12a.

My first .12a had happened a few months prior and I had to put a lot more work into it. Prior to my first 5.12, the hardest route I had repointed was .11b.

If you wanted to know how to climb 5.12, I’m probably not the person to ask. I know a lot of people who climb much harder and with better style than I do, so you’d probably be better off talking to them. I can, however, explain to you the process I took, and the changes I made to go from redpointing 5.11- to sending my first few 5.12s.

To be honest, the idea of pushing grades has not really been a priority of mine except that being able to climb harder routes will allow me to climb a larger variety of routes in an alpine setting, which is where my passion really lies.

However, this winter I decided to put a lot of effort into training hard in the gym and getting stronger. So, my girlfriend and I started bouldering really consistently in the gym. We reached out to a few different resources to find the best training programs and while we didn’t have a set training program, the biggest thing that I think led to our improvements was just being consistent in our training.

We would go to the gym every other day with a train hard / rest hard mentality. We bouldered in the gym almost every time and we bouldered as hard as we could.

We would start off our time at the gym with a slow warm up. This was key for me because I have had some shoulder injuries in the past. This warmup was different some days, but always involved doing six to eight easy boulder problems that progressively got harder. Each problem was separated by a three to four minute rest. Most of the time this warmup is hard to do because I wanted to just jump on my project, but it is key. Many times, before starting the bouldering warmup, I would use exercise bands to warm up my shoulders, the rice bucket to warm up my fingers, or the elliptical to just warm up my whole body.

Once the warm up was complete, we’d find some problems at our limit and work hard to dial all the moves. Sometimes we would send, other times we wouldn’t. We’d climb like this for 1.5 to two hours. Then we’d go to the training area of the gym.

Depending on the day or how tired I felt, we would do a variety of workouts. If we didn’t boulder hard or we had limited time and didn’t get as much climbing in, we would jump on the hangboard and work on finger strength. Other days, we would do pushups, pull-ups, and core. Like I said, we didn’t have an exact program, but just pushing it hard seemed to be enough to start noticing gains on boulder problems over the course of a few months.

I don’t really boulder outside, so these gains didn’t really translate immediately to sport climbing. However, it did eventually make a big difference for me. When spring approached, we began climbing routes in the gym. I wanted to just jump into harder grades on the sport wall, but this, unfortunately, ended up leading to some minor injuries that required me to take some time off.

After much trial and error, I found that, for me, bouldering hard is the key to climbing harder. I can’t sport climb hard in the gym and see the improvements outside. I gain the power I need for harder moves by bouldering a lot. Then, almost like taking time off, I just sport climb easy route. I cycle through a warmup to a route that is pumpy but not too hard and back down to easy routes.

Maybe I climb six or seven routes in the gym starting with a few lower end 5.10s and maybe maxing out at 5.11-. If I try to climb harder sport routes in the gym, I get hurt. I can’t do both hard bouldering and hard sport climbing in the gym. My body just doesn’t let me.

This might not work for everyone and now that it’s warm outside, I find myself in the gym only once a week or so. Outside I like to climb easy to moderate alpine trad routes and I’m sure I’m losing a lot of power. But when winter rolls around again, I will probably implement the same training cycle I did last winter and hopefully I’ll see some improvements again. If not, I guess I’ll try something new.