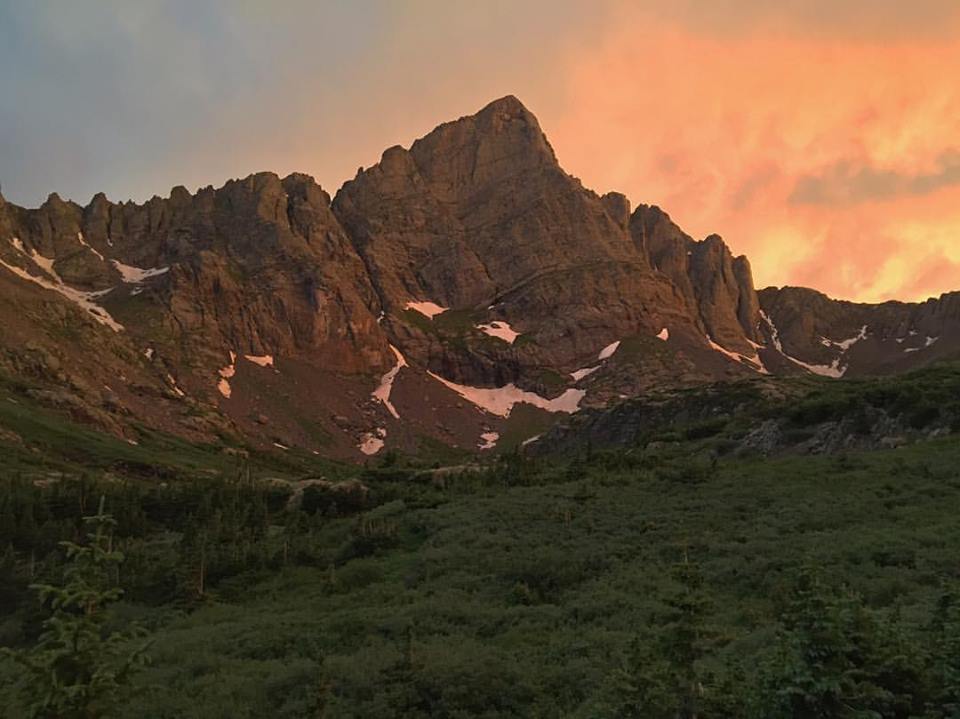 We began our hike in around 4:00am and made our way to the base of the direct start of the Ellingwood Arete. With two teams of two, Martin and Brent started up the first, 5.5/5.6 pitch while Kim and I waited restlessly to begin. Kim and I started climbing once Brent had made some progress on the pitch. The route began on an insecure slab that traversed left into a large, low-angle dihedral, topping out on a large ledge with poor rock quality for an anchor.

Pitch two moved right and then left on a ledge back to the main dihedral. The route kicked back into some steep, insecure stemming with poor gear in a wet crack. We later discovered that this was the crux pitch of the entire route. It continued back into lower angle climbing but was still insecure with marginal gear. The pitch ended on another large ledge below some slabs and a headwall.

Later, we realized that we went the wrong way on this pitch and veered too far right up the slab to some chossy blocks where building an anchor was rather difficult because of the poor rock quality. At this point, it was later than we hoped and Kim and I decided it would be in our best interest to bail.

Martin and Brent continued on.

Kim and I traversed climbers left along the standard Ellingwood Ledges route and down a choss filled gully to some steep grassy ledges. We navigated our way to the edge of a cliff and wandered around for some time before finding the steep, wet, grassy ledge that led back to the base of the wall. We skirted along this and roped up for a very exposed move through a waterfall before we eventually reached the base.

Some boulder hoping and loads of bushwhacking led us to a trail that eventually took us back to our camp. It was mid afternoon at this point and we assumed that Martin and Brent were nearly done.

In the meantime, Kim and I walked over to the edge of a lake and I proposed to her. She said, “Yes!” Excited to share the news with our friends we watched for any signs of progress of for our friends.

As the sun began to get lower in the sky, we were greeted by Brent’s father who was returning from the summit of the Crestone Needle via the Standard South Face. He said he waited on the summit for Brent and Martin for nearly 2 hours before deciding to return to camp.

Our original plan was to hike out that night, but the odds of that seemed slim. So we compiled our remaining scraps of food and ate a meager dinner. When we woke the next morning, we had no breakfast, so we packed up and hiked out early. After a few hours we reached the car and drove to the nearest town where we all gorged ourselves on delicious home-cooked breakfast!