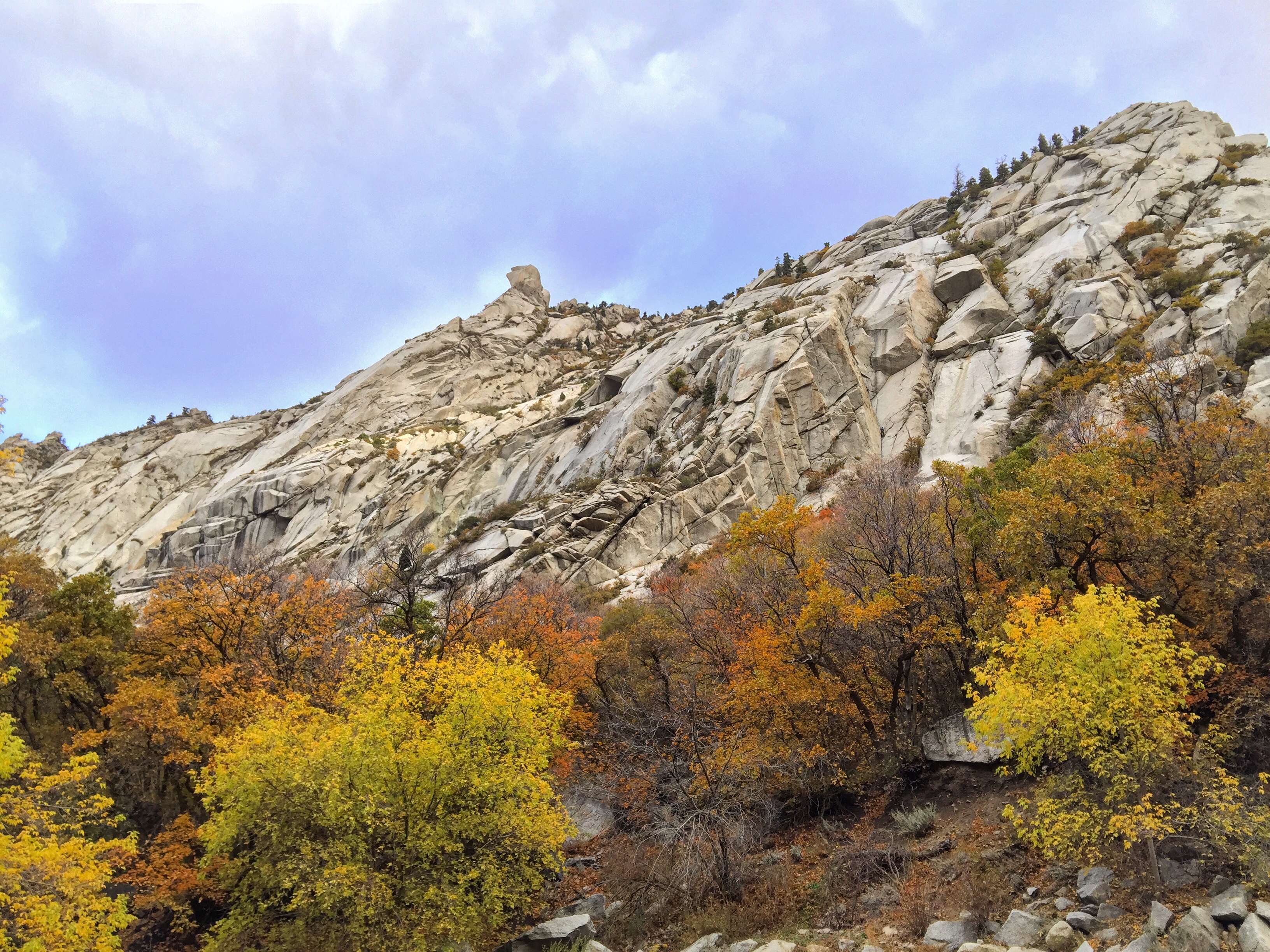 The Thumb isn’t the greatest climb in Little Cottonwood, but it is an aesthetic feature within the canyon. With 10 or 11 pitches of 5.7, it sounded like an awesome adventure to Kirk, Wes and me. We met at the Gate parking at 6am and began hiking to the base shortly after. By 7am, we were racking up for pitch 1. I started up the 165 feet of 5.4 and quickly made my way to the top. I belayed Kirk and Wes up to me.

The Top of Pitch 1 on the Thumb

Wes took the lead on the crack straight across from the anchor on the face right of the wet gully. He made the steep 5.8 move off the deck and followed a dirty off-width section to a tree and traversed across the slab to the chimney on the left. Some more steep 5.7 chimney and hand crack moves led to a big ledge and past 2 crushed bolts on the right to 2 new bolts on the left.

When we were all at this anchor, Kirk took the gear and made his way up the tricky double hand cracks of the first pitch of the Indecent Exposure variation (5.7). This pitch makes a insecure move from the double hand cracks around an arete and into a secure dihedral filled with bushes. Following this wide crack through the shrubs, Kirk made his way over a bulge with wide hands to a small ledge below a roof and a hooking crack.

Here I took the lead again, finishing up the last 20 feet of Indecent Exposure with a couple cool chicken head moves out onto a 5.7 slab around the right side of the roof. From here, I crossed the lunch ledge and made my way up a few easy 4th steps to a large ledge below the trough pitch. I built an anchor and belayed Wes and Kirk to the ledge.

Wes was up again and climbed some fun cracks to a roof and stepped left under the roof to get into the trough. This pitch is rated 5.6 but it is steep, insecure, and has limited gear. I felt uncomfortable following and was very glad that I did not lead it. I think it is the most mentally taxing pitch of the entire route.

Wes Making his Way into the Trough

Kirk, fresh out of PT following a shoulder surgery, was not feeling up to putting 80 feet of unnecessary off-width torque on his shoulder so we swapped leads for the next 2 pitches. This meant that I was up. The only good thing about the next pitch is that it would be very hard to fall out of. It’s a physical 5.7 chimney with no gear for the first 30 feet or so. I started my way into the chimney and had to ditch my water bottle and approach shoes strapped to my harness. I soon realized I had to ditch my hat as well because I couldn’t turn my head in the chimney with it on. I grunted my way up to where I could finally get a #4 sized cam in. Stopping to rest on my chest when my legs and arms became to tired to progress any further. After what felt like ages, I pulled over the steep bulge and was able to shuffle to some blocks. I pulled over these with a strong desire to puke and walked to the belay ledge below a feature called ‘The Ear.’

Me leading the chimney pitch.

I belayed Kirk and Wes up to me and Kirk started up the long (200ft) 5.5, 7th pitch. This pitch went right around the ear and up a slab next to a chimney. It was dirty, filled with bushes, and somewhat disappointing. He belayed Wes and me to the top and into a small cove between two large features. The Thumb’s summit block towered 400 feet above. We were all starting to feel the effects of the long climb, hot sun, and early morning start.

The Ledge below the Ear at the top of the Chimney Pitch.

Wes was feeling, understandably, a bit mentally shot still from the trough pitch and asked if I would take his next lead. Anxious to get to the summit and start our descent, I agreed. I pulled up around a large flake and onto a wide, 5.2 slab. With no gear in sight, I made a run across the low angle to some trees and slung a large boulder. From here, Wes and Kirk followed up and we unroped through the easy, dirty, bushwhack ‘9th pitch’ to the base of the final, summit block pitch.

Me climbing the flake just below the 5.2 slabs. The summit towering above.

Kirk took this final pitch, an incredibly exposed, step out onto a small ledge followed by a mantle move over a bolt. This was just Kirk’s style. He made the few moves and traversed across ridge to the main summit block. Wes went next and I followed soon all 3 of us stood on top of the beast. We had anticipated taking about 1 hour per pitch and with the clock approaching 5pm, we were pretty accurate.

We set up the rappel off the northeast side of the summit block and made our way, one-by-one to the ground. We sat here for a while in the shade, resting, snacking, and filling up on fluids before crossing over to the next rappel off a large pine tree in a notch.

The rap off the summit block’s NE side

The rest of the descent isn’t fun and it is definitely not as easy as the route description suggests. We thought that without rappels, this route could be maybe be skied or paraglided in 45 – 60 minutes. However, on foot, with rappels, and not knowing the route beforehand. I think a 3 – 4 hour descent should be expected.

From the notch to the car took us about 3:45 minutes. We partially got out rope stuck and had to do one extra rappel. Without these delays, I’m guessing we would have hit the car by about 9pm, but our actual time was 9:45. This gave us the car to car time, with a party of 3, of 15:30…

It was a full-on adventure and I would recommend that everyone should do it at least once.