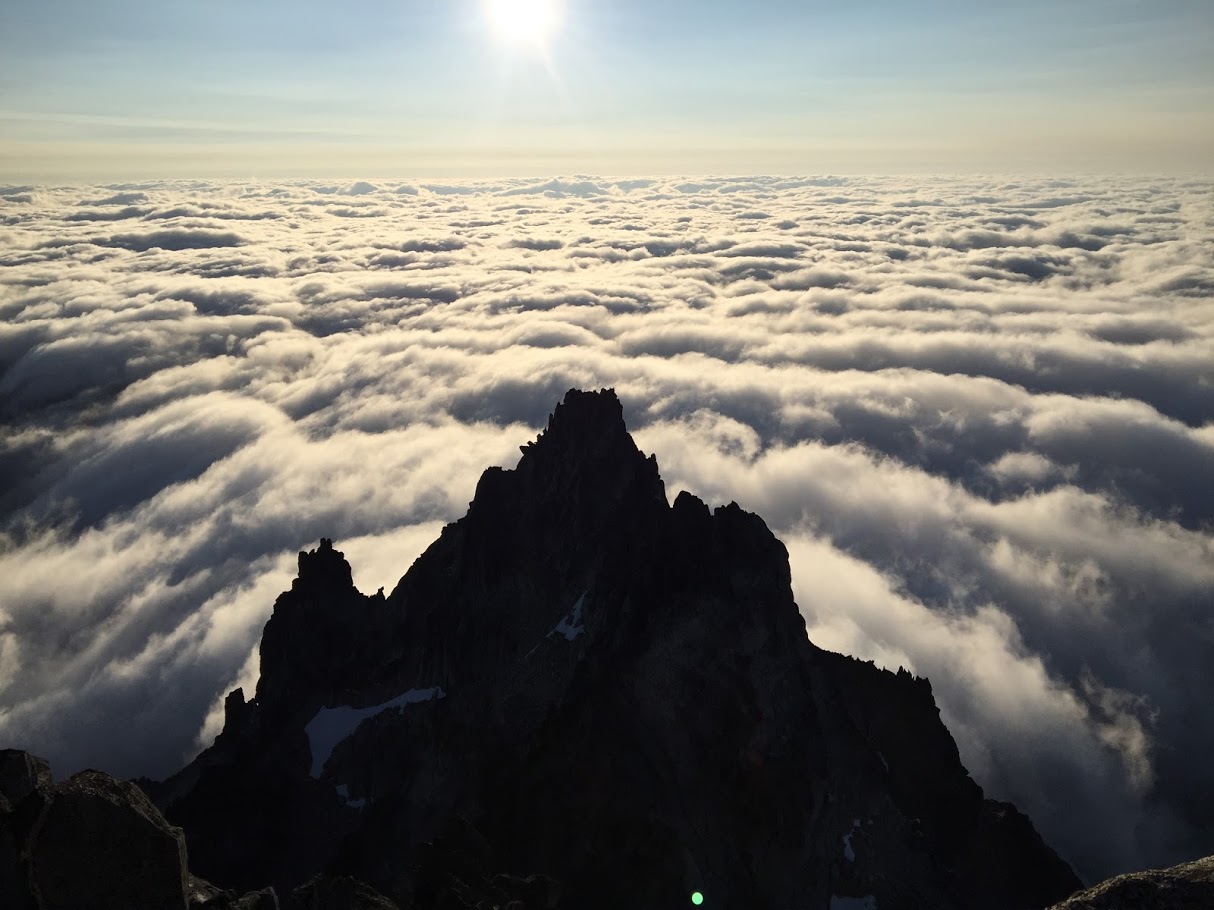 In the summer of last year (2017), we attempted the Direct North Ridge on Mount Stuart, but retreated once we reached the notch about 1,500ft up the route. Storm clouds had completely covered the peak above, and without sufficient rain gear, we were afraid we would become hypothermic if we got wet. We figured our best choice was to rappel and find shelter under some of the large boulders at the base of the route. We ended up “sleeping” on the glacier after not being able to navigate back to our camp in the dark. We ended up clocking about a 35 hour tent to tent time.

This year (2018), we returned better prepared and with a better game plan!

We packed as light as we could with minimal gear and a plan to bivy on the notch half way up the ridge.

We arrived in Cle Elum with an extra day to spare in case of weather. Unfortunately, we had to take advantage of this extra day right away because the forecast called for rain the day we would be potentially sleeping on the mountain. We opted to wait until the following day before going for the route. Our friends Ben and Nathan, who were trying to do the peak sub 24 hours opted to go for it as planned and try to beat the storm to the summit.

The following day, we waited and watched the clouds roll in from the West as the sun slowly moved across the sky. As we prepped to go to sleep we still had not heard from our friends.

The forecast the next day called for a slight possibility of precipitation as well, but with our extra day burned already we changed our strategy. We decided to go for the route as a one-day push and bring the bivy gear just in case we encountered rain or ran out of time.

Our 1:30am alarm clocks woke us and we anxiously shuffled into the car and drove the 40 minutes toward the trailhead. We still had not hear from Ben and Nathan, but as we came nearer to the trailhead we saw headlights coming towards us on the dirt road. Ben and Nathan, looking completely exhausted, pulled over and stepped out of their car to greet us. They had succeeded in just under 24 hours car-to-car.

Stoked for our friends, but nervous for our own journey we continued to the trailhead and began our hike at about 3:30am.

We walked up Ingall’s Pass and passed the campground we had stayed at the year before. The sky began to lighten as we skirted west to Ingall’s lake and around its rocky shores, dropping down the trail to the north and back up towards Stuart’s and Goat’s Pass. The wind roared around us and the clouds moved quickly above making us worry about the future weather. We both felt like we were walking into a repeat of last year’s epic.

As we topped out Goat’s Pass and dropped over the ridge onto the Northern side of Mount Stuart, the wind died and we were greeted with blue skies. The mood changed and we charged across the glaciated terrain to the base of the climb.

We stopped and ate some food, filled up on water, and then scrabbled up the first bit of rock to the big ledge below the first pitch (5.8). It was about 8:00am when Kirk took the lead here and worked his way up the thin crack past a small tree, then out right onto the slab beneath an awkward chimney/bulge, and finally up some easier terrain to a decent ledge. I followed.

I racked up the remainder of the gear from Kirk and started up the next pitch (5.9+). I left my pack on the ledge and was pleasantly surprised to find it much easier than the previous year without an extra 30lbs on my back. I quickly reached the top and belayed Kirk up.

From here, we halved the rope and began the simul-climbing. After completing the first two harder pitches the terrain varies from 4th class to 5.7ish in a few spots until you reach the Great Gendarme where the climbing becomes more difficult again. Kirk and I took turns leading three total simul-pitches to the notch (about halfway up the ridge and our highpoint of 2017).

We felt like we were making pretty good time. It was just before 1:00pm at this point and we took a break to eat some food.

The sky was relatively clear but a line of clouds to our west was slowly inching its way toward us. We pushed onward into unknown terrain and past where we had to rappel the year prior.

Kirk started us off simuling from the notch and we eventually popped up onto the main knife edge for long periods of time. Three more simul-pitches and a few more hours of climbing along this terrain put us right at the base of the Great Gendarme.

Because Kirk had recently broken his foot and hadn’t had a ton of time to train and acclimate to the intensity of a route like this one, he was feeling a bit worked and was not looking too stoked to lead one of the gendarme pitches. So, I quested off up the first pitch of the gendarme (5.9) as the cloud line to the west slowly began to overtake us.

I started up the next off-width pitch (5.9-) fully in the clouds. We were both a bit stressed here. We didn’t really know what to expect or how much further we had til we reached the summit. The clouds added to the intensity of being 2500 ft off the deck at this point. Despite the anxiety we were experiencing, leading that offwidth pitch in the clouds was probably the coolest experience of my entire life.

Once we were past the gendarme, we began simul-climbing again. I ended up building an anchor about halfway up the last harder (5.8) pitch. Hoping I could simul-climb through it, I started up the crack and then realized the fall potential that Kirk and I were both experiencing while simul-climbing was too high. So I built the anchor and belayed kirk to the ledge below me. Once at the solid belay ledge, he put me on a real belay and I finished the pitch and belayed him up.

From here, the route finding was a bit tricky and we lost a bit of time wandering around. Eventually, two more simul-pitches put us on top of the ridge and another 100ft of 3rd class scrambling got us to the summit at about 6:30pm.

The clouds that had previously loomed above and around us now sat in a blanket below the summit and as the sun lowered toward the horizon they began to glow gold and pink.

We considered hiking down the Cascadian Couloir in the last bit of light, but the weather looked good and we had our bivy gear. So, we agreed to sleep on a ledge just off the summit. We set up camp, got some water from a bit of snow on top, and cooked some warm food before getting a few hours of sleep.

When the sky began to lighten (about 5:00am), we packed up and made the steep, loose descent down the Cascadian Couloir. It’s a long hike down, but not nearly as sketchy or gnarly as many trip reports made it out to be. Kirk and I were pleasantly surprised to reach the bottom in about 2 hours.

At the bottom of the couloir, we followed a trail across the valley to Long’s Pass (a shorter distance that returning to Ingall’s Pass). Once over the pass, the trail switchbacked down to meet up with the main trail and eventually the trailhead.

We were stoked to reach the car (about 9:00am) and sit down. This year, we clocked a 35.5 hour car-to-car time with a bivy on the summit. Our recon mission from the previous year left us much more prepared for the logistics of a route like this and the game plan we formulated allowed us to prepare for the worst while making the best of the situation if conditions were ideal.

Later that day, we met up with Nathan and Ben and ate some delicious Thai food while exchanging stories and experiences from our separate adventure.