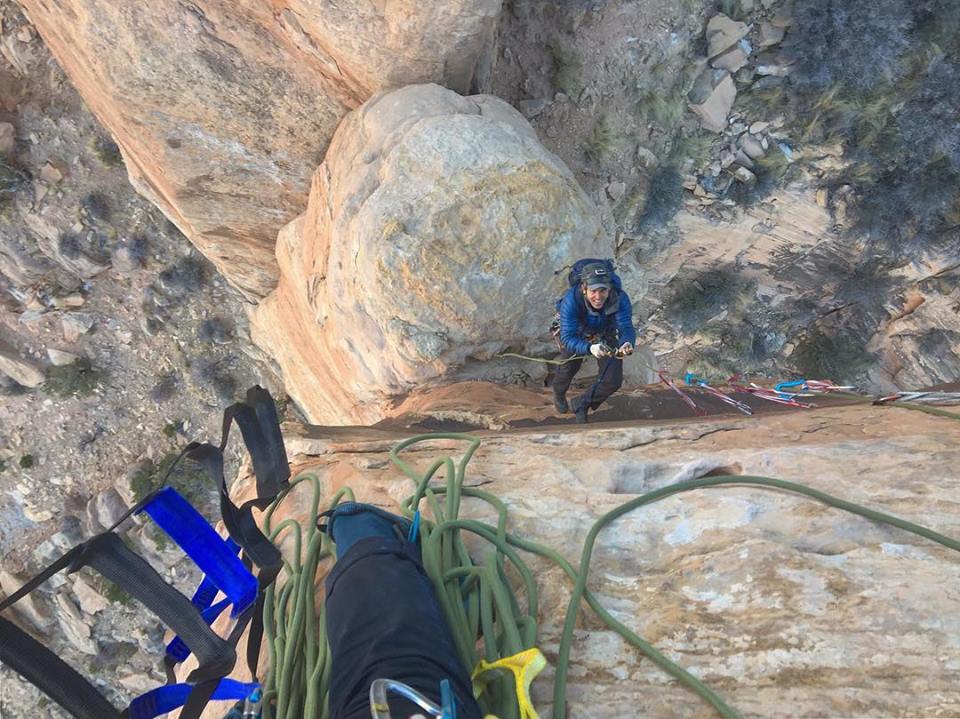 Kirk and I recently took our first trip to The San Rafael Swell in southern Utah. On that trip we just cragged and found some awesome single pitch routes. However, we wanted to return and try out the more adventurous side of climbing in The Swell.

We looked up a bunch of routes on Mountain Project and found a cool looking tower call the Lightbulb. It was 3 pitches rated 5.10 and A1. With that grade we’d be pushing our free climbing and get to try out some aiding as well.

After driving around for a bit, we found the tower. From afar it was a bit daunting looking, but we hiked to the base and as we approached the tower became more feasible. I racked up and took the first pitch. It was in the shade and the rock was icy cold. After a few minutes, I could barely feel my hands and had to stand on a ledge to let the barfies re-warm them.

Once the pain had passed, I stepped of the ledge into the crux. 0.75 crack that slowly widened into an offwidth. I made a few desperate moves to a good hand jam. I swam upward into fists to a decent rest. Then pulled into some exposed face climbing around an arete to the chains.

Kirk followed and then started up the second pitch. This pitch was a low-angle, but insecure chimney to a ledge. From the ledge you do a few thin moves into a hand crack. The crack goes up through a bulge and then eases off to another large ledge.

From here, the aid climbing begins. A bolt ladder where every 3rd bolt would probably hold a fall. I stepped into the aiders and pulled my way from one sketchy bolt to another. Topping out with a beached-whale maneuver. I fixed the rope and Kirk followed on his ascenders.

We enjoyed the summit for a bit and then rapped and hiked back to the car. I was stoked that Kirk and I both freed the 5.10 pitches.