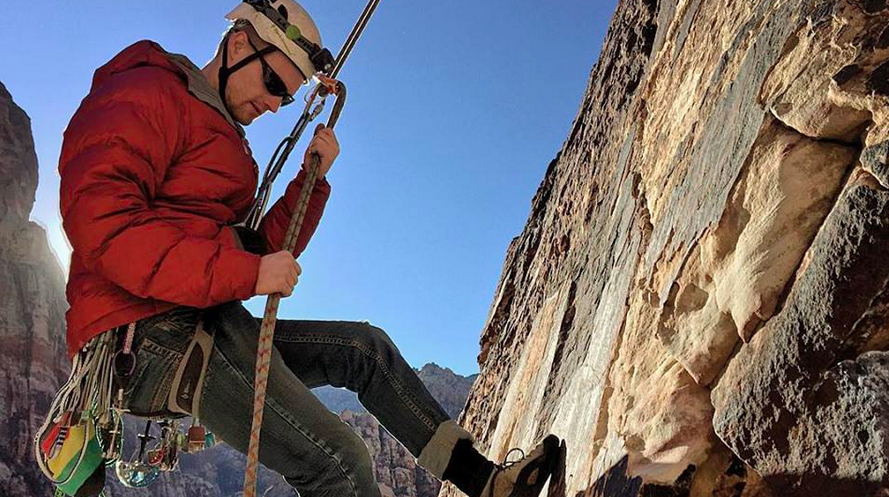 My girlfriend and I took a week long New Years trip down to Vegas this year to soak up some warmer weather and get a few climbs in while the snow continued to dump in Salt Lake. We wanted to do a variety of climbing, but were especially excited about getting on a few classic multi-pitch trad routes. We had a few routes in mind, but I am a bit unfamiliar with the area and Kim and I haven’t done a ton of multi-pitch trad climbs together. So, I wanted to play things a bit safe.

Cat in the Hat

Our first big climbing day we tried to go up Cat in the Hat. We had done some reading on this route before we left Salt Lake and it looked like a nice option for a colder, December day. It would also be a nice intro route to the longer, sandstone climbing that we don’t have in Salt Lake.

So we hiked in to the base of the climb and started up the first pitch. We combined the first two pitches into a long single pitch. It starts up a few ledges into a steep step up to get into the crack. You follow some sweet hand jamming up and out onto an sweet exposed face for a few moves and onto a ledge. The chains at the top of pitch one would have caused some serious rope drag, so I skipped them. Unfortunately, the next 20 feet of climbing was slab and an eight inch wide crack, so I had to basically solo this section.

I reached another ledge where I thought the chains were, so I wandered around looking for the anchor, 35 feet above my last piece of protection. I realized the anchor most be on the next ledge, another 15 feet up, so I scrambled to this ledge and finally clipped the chains. This entire time, the sun stayed behind the large cliffs behind us, ensuring that my hands and feet were completely numb.

The “third” pitch is a walk across a long flat area to another rock face. It climbs a pretty cool dihedral with some stemming and face climbing just before the sling anchors on a small tree.

Pitch four is amazing. It is one of the coolest pitches ever. It’s starting to get way up there and the crack is super steep and fun. The crux is a slight traverse left from one crack to another. It feels really insecure and exposed but makes for incredibly exciting 5.6 climbing. Once into the other crack, you go up more steep face and crack climbing to a small ledge.

By the time we got to the top of pitch 4 after being in the freezing shade all day, we were high enough on the wall to get a taste of the sun just so it could dip back behind the ridge. Frustrated and cold, we bailed without doing the final pitch.

After our frigid day on Cat in the Hat, we took a day to do some sport climbing and then decided to try another longer climb. We had seen some people coming and going from a route called Birdland when we were walking to and from Cat in the Hat. We did some research and found the route to look pretty stellar.

We woke up a little bit late on New Years day before making our way to the trailhead. We walked the same path as a few days earlier, but veered right out of the creek bed before arriving at the base of the route. Because of our later start, there were already two parties ahead of us. We met some friends on Cat in the Hat and they were joining us on Birdland as well.

They went up next and after about an hour of waiting in line, Kim and I started up the route. It was about 11:30 at this point, and we figured that we wouldn’t be able to finish the whole thing.

The first pitch goes at 5.6 and is a steep, but featured face that follows a crack of varying width to a large ledge. The climbing is juggy, fun and slightly overhanging a few spots. Really unusual for a 5.6.

Pitch two goes from the belay ledge straight up over a bulge into a slabby face with a pretty cool finger crack that lasts about 15 feet before connecting with a big, inside corner. This pitch is considered 5.7 but feel a bit awkward and strenuous when you’re climbing it. The left corner is wide and slanting left, so it makes you feel like you are going to fall out left for a little while. It gets a bit steeper as you navigate a series of blocky roofs and varying wide crack systems before popping back onto a featured face. For a few more moves you climb the face to another very large ledge with a two bolt anchor.

The third and our last pitch of the day was great. At 5.7+, it might be one of my favorite pitches of the trip. It starts up a ramp-like feature that slopes up and left of the belay to a blank face with a bolt. The moves through the bolt are steep and somewhat delicate. You traverse left and then up to reach another crack system that takes up over a bulge and onto less steep terrain. A few more moves and you are at another bolted anchor.

Because of time and some issues in our friend’s party, we decided to rappel from here. Once on the ground, we hiked back to the car and enjoyed the rest of the week doing some single pitch trad and sport routes.