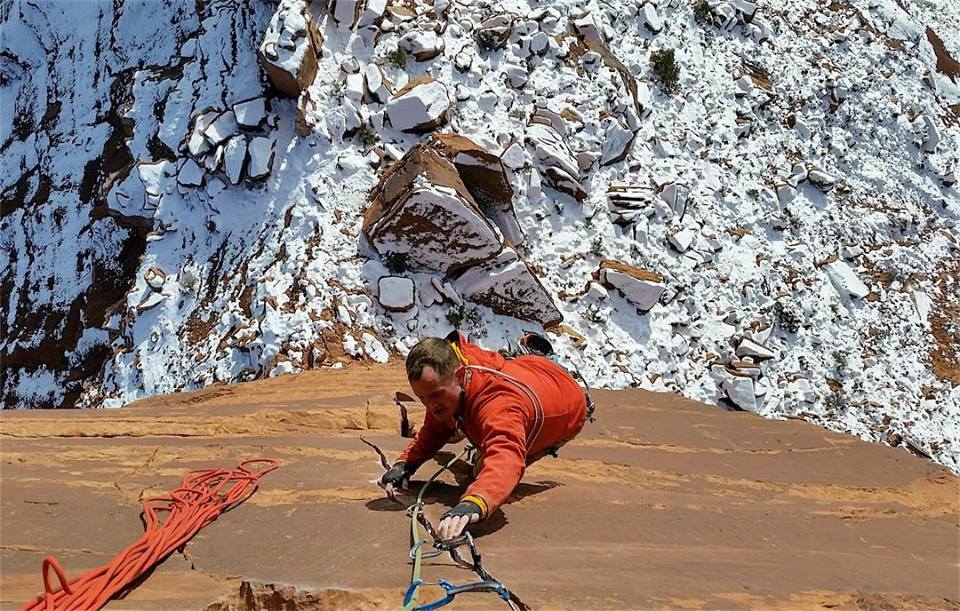 For some reason, we thought it would be fun to drive down to Moab and give the classic route Fine jade (.11a | 5 pitches) a try. It is a route that is a bit beyond our climbing ability, but we figured that we could just aid through any tough spots on the route.

We started driving early Saturday morning around 5am. We were very surprised when we got to Moab that there was more snow on the ground than in Salt Lake.

This was a bit discouraging, but we stopped and grabbed some breakfast and drove to Castle Valley. We sorted gear and hiked up the steep hillside to the saddle, a hike that normally takes about 40 minutes.

After 2 hours of slipping and trudging through snow, we were finally at the base of the climb. Once on the saddle between The Rectory and Castleton, ferocious winds blasted us and cut through our layers. Adding more of an alpine feel to an already freezing day. With a high of 45 degrees, we expected to be suffering a bit with the cold, but the wind took it to the next level.

Our optimism persisted and Kirk racked up for the first pitch. It was harder than expected. He yarded on gear and slowly made his way upward. After another few hours he reached the chains and Sam and I followed up to the belay ledge. We all mutually agreed that the wind was too much and decided to bail. We rapped back down to the ground and made our way down the slippery slopes back to the car.

It was a fun adventure and worth being in Castle Valley with such beautiful, snow-covered landscapes.