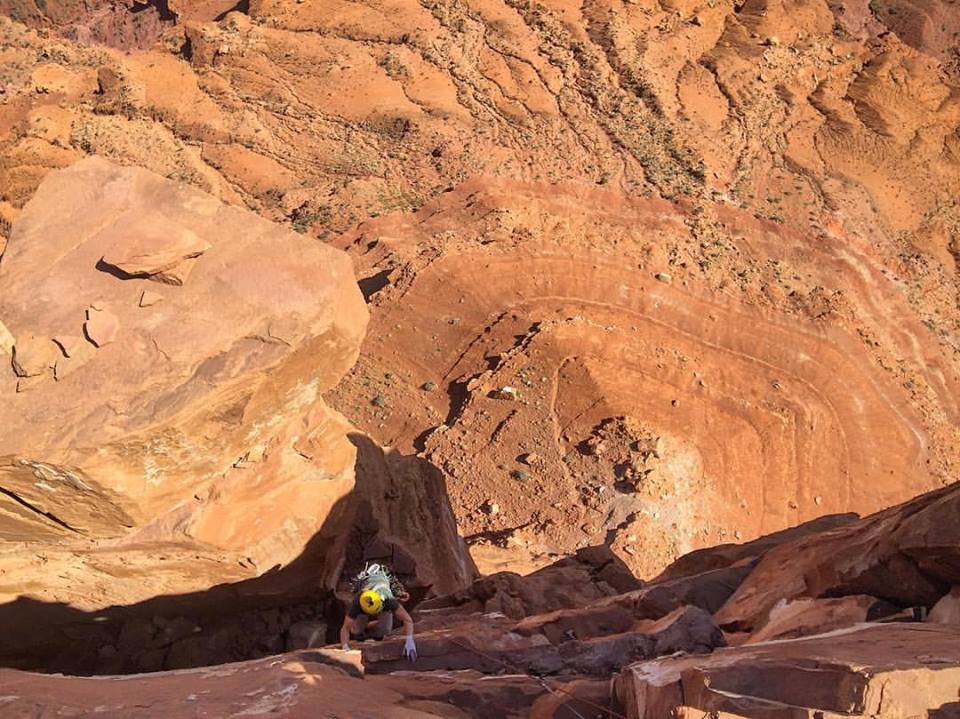 Castleton Tower is an iconic climbing destination for trad climbers all over the world. With two routes on it rated in the 5.9 range, it makes it one of the first towers that many climbers do. Because if this, the tower is popular and there are generally multiple parties on every route. We chose to do the North Chimney route on the tower because we heard it was cleaner and more aesthetic line. The 5.9- vs 5.9+ of Kor Ingalls also played a part in our decision making as well.

Kirk, Wes and I left Salt Lake City in the evening with the plans to camp and wake up early at the parking area below the tower. We arrived after dark and set up camp.

We woke early and made some breakfast before we started making our way up towards the base of the climb. The hike to the base takes about an hour. We arrived at the ridge and began to sort gear. once we had everything set, we scrambled up the steps up to the base of the main tower feature.

I started up the first pitch. It begins in a dihedral that steps left around a roof and into a consistently difficult double crack system on a face and in the dihedral. The pitch is 90 degrees of climbing for over 100 feet with a bulging crux right at the top. The pitch goes at 5.9, but comments say that it’s more like 5.8+. I felt that it wasn’t much easier the Supercrack in Indian Creek, but we hadn’t been crack climbing very much in the last year.

Pitch two is the crux of the route and is an insecure, wide crack that leads into the heart of the tower. The first 30 or 40 feet were really difficult, but the rest of the pitch isn’t that easy either. Large chalked blocks made for overhanging hand crack roofs to a small ledge with a piton for an anchor. Wes led this pitch and I was very glad that I didn’t.

Kirk took the last two pitches and linked them as one. I really enjoyed this pitch. It continues up the chimney to a stemming step across onto a big ledge and out of the main chimney. Some easier scrambling around a couple chalk stones puts you on a large platform between a sub tower and the main summit. A 5.7, exposed face takes you to