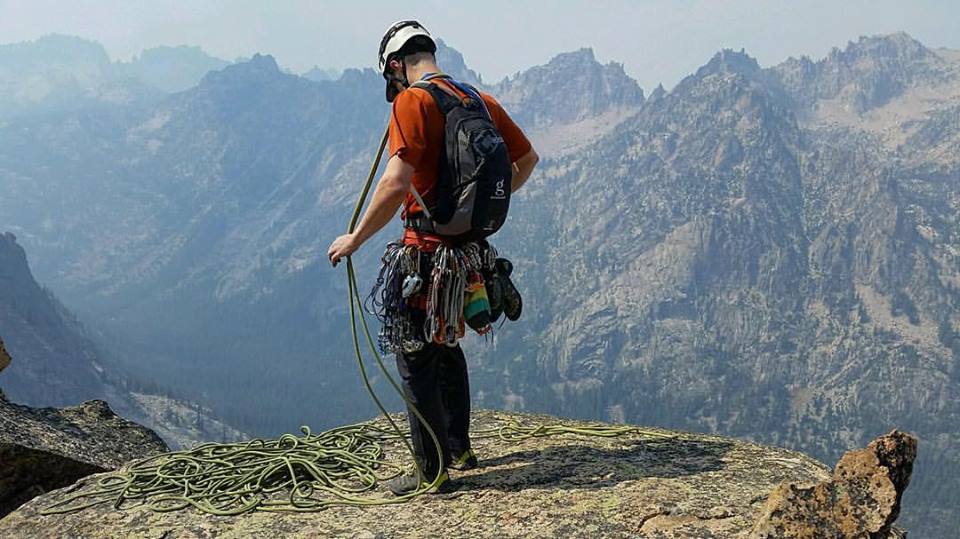 A few weeks ago, my friend Kirk and I were trying to decide on an adventure. Being from Salt Lake, we had plans to go to Yosemite, but ended up not working out for the timeframe that we wanted. We did have a couple days to make something happen, so the Elephant’s Perch stood out to us as a moderate climb, short drive and easy approach.

We left Salt Lake around 10:00am on a Thursday and drove the 6 hours to the Redfish Lake Lodge. We paid the $14 round trip fee for the boat shuttle across the lake and began our hike to camp around 5:00 pm. The hike to Saddleback Lakes took slightly longer than anticipated because we were enjoying the scenery and not taking the hike too seriously.

We ended up at camp around 7:30pm, set up for the night, and made dinner before it got dark. Our plan was to get up around 5:00am to ensure plenty of time for the climb. Others said it was too cold, so we slowly woke up around 6:30.

We got to the base of the climb and left the ground around 8:30.

Pitch 1 was a ledgy, blocky bit of climbing before a kind of awkward stem around an large chalk stone. I led this and linked it with the second pitch to the tree. This wasn’t really that beneficial because we ended up pitching out the last 30 feet of pitch 2 because of a few reasons, but mostly because linking pitch 1 and 2 was super wandering and ended up being really horrible.

Pitch two starts up a pretty insecure chimney until you make an insecure move out of it and onto a small ledge. The “5.8” mantel is the worst move on the route. It’s awkward and unprotect-able. If you fall you’ll deck. The tree is after the mantel and 15 feet of cool crack climbing.

So Kirk led the somewhat uneventful, last 30 feet of pitch two and I took the lead again.

The next pitch is great. It starts with some easy, crack climbing over some blocky stuff and then into a steep crack that leads up into a dihedral. Before the dihedral you move left onto a really cool ledge traverse. It doesn’t have much gear, but it’s super easy and not too long. This ledge meets up with 30 or 40 feet of stellar crack climbing ranging from perfect hands to perfect fingers. It ends at a two bolt anchor.

Kirk took the lead for the next 3 pitches.

Pitch 4 starts on the last 15 feet of the crack of the previous pitch. This crack heads up into a very large roof with some large flakes that stick down from it. There is great gear in these flakes, but rope drag is a potential issue. You undercling left around this roof for about 30 feet and then follows a few cracks to a large gully above the roof until the gully ends at a large diamond shaped face.

The next pitch moves up the slab on the left face of the gully and left of the gigantic diamond feature. The slab is broken up by large ledges with really great protection. Towards the top of this slap, there is an arete to the left or the dihedral of the diamond face on the right. You can go either way here. Either way, you will eventually move around the arete above onto another face. Here the exposure picks up a bit. The pitch ends in a small alcove in the face below a few steep cracks.

From here Kirk led pitch 6 up and right from the alcove up a right facing, somewhat sloping dihedral that headed up toward the corner separating the current rock face from the top portion of large diamond. Before you reach this large corner, however, you move up the cracks to a few belay options. Kirk took the initiative and led into the first bit of the 7th pitch. The crack thins and the face kicks back and gets a bit steeper. He belayed in the main dihedral just after the technical, thin step across below the 5.9 crux of the route.

From here I took the lead again. I followed the blocks to a steeper face or “roof” with a few large vertical cracks running through it. Here you have to work your way up and left through the pumpy cracks until you can step out left onto a left slanting trough-like feature that eventually spits you out onto a large ledge.

Pitch 8 was another 150 feet of 3rd class climbing broken up by a few sections of fifth class climbing. This pitch “tops out” on a large boulder a few hundred feet below the true summit of the perch. It was about 2:30pm at this point.

To descend, we headed down and left onto a large grassy area and followed it to a steep boulder field leading to the main ridge of the perch. On the other side of this ridge is the descent gully. The gully is dirty and full of loose rocks. At the bottom it cliffs out. Here you can move skiers left to a tree and rappel, or skiers right to a ledge with a 2 bolt rap anchor.

We went right to the chains and rapped easily with a 70 meter rope. It was an easy hike from here back to camp at the lake. We packed up camp and left around 5:30pm. We hiked pretty quickly in order to make it back to the boat by 7:00pm (the last shuttle out for the day).

We made it by about 6:45pm and enjoyed the sun setting over the peaks as we rode back to the lodge. It was Friday night, so there was a live band and burgers. So we sat and enjoyed the food, music and the stoke from the accomplished goal of the day.