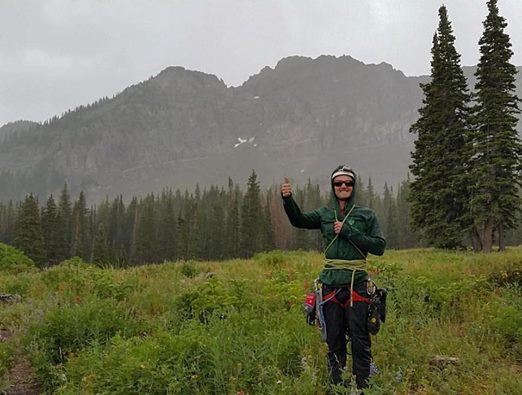 I had done a little bit of reading about Black Streak on Devil’s Castle before my friend suggested the neighboring route “Horns of Satan.” I am glad he did. The route is traditional protection, but because it is Limestone, it is mostly bolted and incredibly chossy. The harder sections are very well bolted and incredibly fun.

Our adventure started around 7:00 or 8:00am when we parked at the upper parking lot near the campground. The hike to the base didn’t take too long; maybe an hour or less.

We started off by linking the first two pitches together. Kirk took the first lead and cruised up the 100ft, 5.7 pitch with only 3 or 4 bolts and very poor rock quality. A few rocks crashed down the gully to our left by as Wes and I watched him climb. The second (5.8) pitch’s rock quality improved drastically and when I followed up I felt a little bit more secure moving to the second set of chains. This pitch was also protected by 3 or 4 bolts.

I took the lead on the third pitch (.10b). This pitch was pretty great and didn’t feel too difficult for .10b. The bolts were spaced very close together and the two roofs were steep, but had pretty big holds.

From the top of pitch 3, routefinding becomes a bit of an issues. We got lost for a minute on the 3rd class / easy 5th class section before accidentally coming across a 2 bolt anchor that happened to be below the 5.9 bolted pitch (Pitch 6). Feeling lucky and not having lost too much time. I took the lead again. This pitch is really great. It is consistently 5.9. It is about 100 feet of climbing, and it only has 6 bolts. So the excitement factor is fairly high, but the climbing is really good.

This pitch tops out on a large ledge with another 2 bolt anchor left of a crack leading into a roof. Kirk took this pitch placing a few pieces of gear through the thin hands section and into the 5.9 roof. From here, the climb follows a few bolts through some thin, .10c face climbing. Kirk linked this with the final, 5.5 pitch because a large storm had moved in very quickly.

Wes and I followed up to the top of the route to a view of dark clouds moving in from all directions. Thunder was rolling and we gathered up our gear as fast as we could just as the rain started falling. The ridge to the summit of Devil’s Castle is 5th class, but somehow we managed to descend at nearly a run. We reached the trail on the ridge and had to jog towards the storm and the saddle between Sugarloaf and our summit point.

We dropped off the ridge keeping our fast pace. When we hit Cecret Lake, it was pouring and hailing very hard. We were soaked when we reached the car, but we were safe and the climb was awesome. We seriously dodge a bullet on this route. Despite the storm, the route was a blast. Most of the pitches were pretty great on their own, but the two 5.10 pitches were especially good.