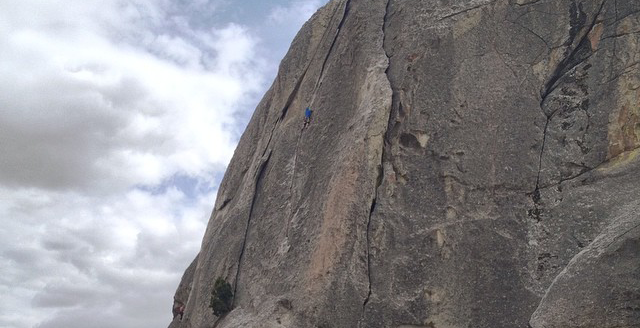 Because it has been so rainy in Salt Lake City the last few weeks, Kirk and I were able to sneak away to the City of Rocks on Saturday to take advantage of a day of clear weather. We got on three routes each.

At the city, you have to build anchors at the top of each route and your partner must follow you up. This is great practice for building anchors, but is sort of slow if both partners want to lead. We started the day trying to warm up on “No Cash Refunds” a fun and short 5.7, but the route ended up being a bit damp so we moved to a 5.8 sport route.

After we both led the route, we moved to the Bloody Fingers Corridor to climb “Intruding Dike,” but a group of climbers were on it. Instead, we climbed “Hough’s Crack,” a short and easy 5.7 that was actually really fun and steep.

After Hough’s Crack, we went over to see if “Wheat Thin”– 5.7, 120ft — was open on Elephant Rock. I had been wanting to try this route for a while and felt confident enough to give it a go.

The route begins with some easy climbing up some slabby rock that has good features until you reach a flake that begins horizontally and becomes steeper. The climbing on this first bit is really easy and the gear is pretty big. As the crack becomes more vertical, the wall gets steeper and the features of the rock begin to smooth and disappear.

The climbing becomes more difficult and the flake and gear gets thin. This was the crux for me. After some hesitation I climbed to the right of the bigger crack on the left and out onto the face. I plugged a cam and moved up more. The rock features became more pronounced once again and I was able to place another came and move left onto some jugs where I pulled the lip and topped out.

I built an anchor and belayed Kirk up. We rapped down and went back to the Bread Loaves area so Kirk could give “Carol’s Crack” a try. He led up and I followed. The clouds were getting thick again and the evening was winding down. We decided to call it a successful day. We were both satisfied and climbed back into the car for the drive back to SLC.