Classic Climbing and Splitboarding in Little Cottonwood: Winter on the South Ridge and South Face of Mount Superior 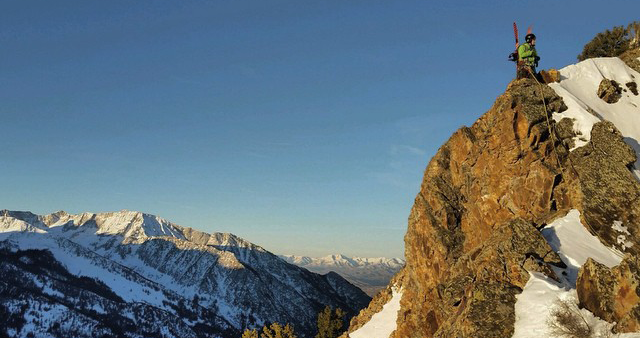 This has to be one of the most intense all-around adventures I have ever done, and it happened in my own backyard of Little Cottonwood Canyon. I got the crazy idea to climb a classic winter alpine route and ski a classic winter descent. Here’s how it went down:

We got to the base of the ridge around 6am. We began up the ridge, ice axes in hand, climbing gear and snowboards on our backs. The south ridge of Mount Superior is an amazing climb in the summer. In the winter, it gets a little bit more spicy. In snowboarding boots and with a really heavy pack, it gets super intense.

The route goes at 5.4 on mountain project and 5.6 on summit post, but the majority of the route is 3rd class with varying exposure. However, the exposed sections are knife edges with big drops on both sides.

We brought ropes and trad gear with the expectation to simul-climb exposed, technical sections, but because Kirk and I had roped up sections previously on our climb of the ridge and descent of suicide chute, we felt like we knew the ridge well enough in the winter to solo.

We continued unroped past suicide chute and the next section of rocky ridge onto an easier, rock and snow slope. We all felt really good that the hardest climbing was behind us. To our surprise, another section of very exposed and technical rock appeared in front of us. We all started up it. The difficulty was more than we anticipated and the exposure was life-threatening.

We knew this had to be the last section of technical climbing, but our mental stamina was drained and our physical endurance was running out. We pulled out the ropes. Kirk set up an anchor and I geared up.

Climbing on gear is scary. Climbing on gear after soloing for 3 hours feels like sport climbing in the gym. With a rope on, all my anxiety disappeared. I lead the last 60 feet, set up an anchor, and belayed Kirk and Nathan to the top of the pitch. The mood drastically changed. Stoke was high again and our descent route was in site.

We trudged another 100 feet to the chute where we would drop in on the south face. We switched from climbing to ski/snowboard mode and prepped to drop in.

Kirk dropped first, made a few turns and then things slowed down quickly. The seriousness of the consequences of a fall presented themselves and he became very cautious in his riding.

Nathan dropped in next and I followed soon after. I wouldn’t call myself the greatest snowboarder, but I feel like I am capable of steep riding. However, snowboarding the south face of superior in spring condition is the most terrifying thing I have ever done.

The chutes we were descending were at least 45-55 degrees with 100 foot rocky cliffs to break your fall. I descended slowly, with ice axe in hand. I rode down and passed Kirk and Nathan into a narrow chute that opened up into a small bowl. The bowl was still steep, but manageable.

We continued skiers left down another steep section that narrowed into a very steep chute. The chute opened again into another bowl where we had to cut hard skiers left to avoid rocky cliffs and stay on snow.

At this point, the steepness reduced and the consequences of falling disappeared. Our descent speed increased and we enjoyed some really great corn riding all the way to the road.

We were all pretty exhausted mentally when we reached the bottom, but the stoke was really high.

I think that because I would not consider myself a very good snowboarder, that this descent felt much more dangerous than the ascent up the ridge, but I would guess that a good skier might say the exact opposite.